Players Coming Together from Many Surf Clubs From Across the Country, Surf Select Wins 2018 Man City Cup

#ManCityCup: Five States, One Team, One Club — Usually, team chemistry and familiarity are important qualities for a winning combination — but with expert coaching and talented, passionate players — a team of players who had just met  with success.

Youth Soccer News: The quality of the Surf Soccer network was on full display during the 4th Annual Nexen Man City Cup, held every Memorial Day Weekend in San Diego. 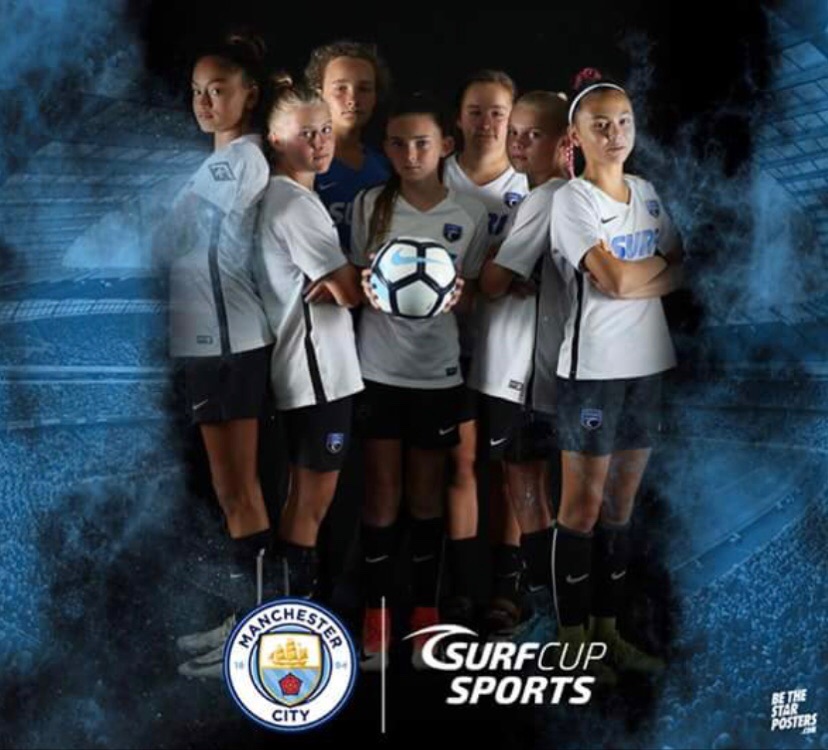 Bringing together players from across the Surf Network, which has 16 partner clubs with more than 12,000 youth soccer players spanning Hawaii to New York, Surf Select chose the “Best of the Best” to showcases their skills.

Sixteen players from different Surf Soccer Clubs came together to compete in the 2005 girls age group at Surf Cup Sports Park in Del Mar, California. Coached by San Diego Surf’s Monica Dolinsky, a former standout star at The University of Kansas, the players came together from Hawaii, Utah, Washington, as well as California’s San Clemente and Anaheim Surf clubs under the Surf Select banner.

Prior to the start of the Man City Cup, Coach Dolinsky took her players to practice on the beach in Del Mar, California — to get acquainted and prepare for the competition. After three games together the girls were clicking, and coach Dolinksy was comfortable with the squad, which really showed in the 3-0 semifinal win over GPS California.

The final match saw the girls in a tight game, where only one goal was needed to raise the trophy. Hawaii Surf’s Tavena Oliveira netted against bracket 1’s winner Freedom FC, and the team would hold off to win the championship 1-0.

“The Man City Cup was such a fun and awesome soccer tournament. For a bunch of young ladies from different states that have never played together before, the bond that we made as a team on and off the field was incredible and priceless,” said Hawaii’s Jaety Mandaquit. “I am truly blessed to have been a part of this experience!”

“I made 16 new best friends from 4 different states in 3 days, played 5 games, and won 1 championship. It was amazing,” said Abbie Haslam, Utah Surf.

For a team full of girls who had never played together, with a coach they weren’t familiar with, the team chemistry started to grow immediately after the first training and continued throughout the tournament, and the team got stronger with each match.

“I knew the best way to get these girls to click would be to have a training session on the beach before the tournament,” Coach Dolinsky said. “It was a really fun way to say ‘Welcome to San Diego, let’s have some fun!,’ which I think translated onto the field during our games.”

As the Surf Affiliate Network continues to grow, the opportunities to continue bringing clubs, teams, and players together will continue to increase.

The goal of the program is to have a partner club in every major US market and for those clubs to provide a high-quality, fun, and safe place to develop players of all skill levels.

If your club is interested in learning more about joining the free Surf Affiliate Network, check out their site affiliates.surfsoccer.com.